That’s the key; no matter what your purpose or your topic. Just write. Plans, reports, essays, articles, poems, novels, plays, musicals, films – they all start the same way. Someone writes. To be more precise, someone writes the first words, the first sentence, the first paragraph, the first page. Nothing writes itself. And very few people, very rarely, get it right in the first draft. So you just have to take a deep breath and start writing. Write as well as you can. Write without thought for the fact that some (much, all) of this first draft might never be seen by your audience. Write with such a focus on the process that everything else in your life is forgotten.

If you’re not sure of the first word or sentence, just write something. Anything. And then keep writing; keep building on those first words. Resist the temptation to question or edit. Just write. Sooner or later, once you are warmed up and caught in the process, you will find yourself realising- and writing – the right stuff. Sometimes we have to get things out of the way before we can move forward appropriately. That’s nearly always the case when it comes to writing.

There is a very significant gap between that sense of what we need to write about – that initial, wordless, fleeting feeling that tells us we have something to say; that we’ve seen, heard, considered or intuited something that has to be shared – and the first deliberate thoughts about it. The gap widens once we attempt to turn those thoughts into words on a screen or a page. The only way to close these gaps is to start writing.

And avoid all thoughts of perfectionism. It can be a blockage on the same grand scale as not being sure of the first word or sentence. In fact, it’s often closely connected. So often I have heard people say something like, ‘I haven’t started writing yet because I haven’t worked out the perfect opening line.’ That’s a negative, naughty, trick of the mind. If you ever hear yourself thinking or saying it, smile tolerantly and then banish it to the middle of a busy road. Writing a brilliant opening line is a real achievement. For anyone. And just because it’s a great first line when we read it in the finished work, doesn’t mean it was written that way in the first draft.

Perfectionism is either a great motivating ideal, or an excuse for doing nothing. In the process of developing our craft consistency is key. Consistent practice supported and fuelled by consistent learning enhances performance and production. So just be consistent. Just write. 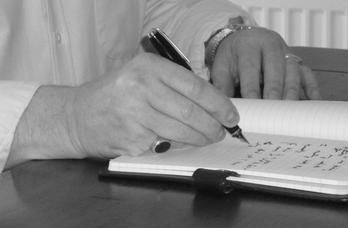