The film includes poems selected from both the City Fox & others in our community and debris.

As with those two collections, it highlights the importance of, and the relationship between, community, communication and learning and the role nature can play in this regard.

The result of a wonderful collaboration between the super-talented filmmaker Steve Reynolds (www.reynoldsfilms.com) and myself, the City Foxcombines a series of short films about individuals at different stages in their lives, with on-stage performances and brief interview excerpts. The interviewer is the wonderful Stuart Williams (www.stuartwilliams.net.) Stu also wrote the music.

The film premiered at the Bonington Theatre, Arnold, Nottingham on Friday November 10th 2017. Both the Deputy Mayor of Gedling and the Lord Mayor of Nottingham attended. The dvd has been on sale since then; all profits from sales go directly to Nottingham Central Women’s Aid, my local women’s refuge.

This was a great event and a lovely night at The Cross Keys pub in Nottingham. The film

includes my wonderful publisher Matthew Smith making a great speech, the guests all

testing their ability to read emotions on a person’s face, and a little hypnosis.

This is a poem about the Ratcliffe-on-Soar power station, situated a few miles south of

Nottingham. It was inspired many years ago when I was driving past, taking two

young boys to see their seriously ill father who was in hospital in Leicester. ‘Look,’ said

the youngest boy, pointing at the smoke pouring out of the cooling towers, ‘it’s the cloud

This is the final poem in The City Fox collection. It was filmed on the spur of the moment

hugely talented filmmaker Steve Reynolds. Steve filmed and edited all of the films

expressing why I believe we are better together. I was keen to produce something that

relationships. To see the result click on the adjacent  link .. I’m thrilled by the fact that, with

just a slight change, the poem has been read as part of several wedding ceremonies.

The Unlimited Podcast is the brainchild of the incredibly lovely Stu Williams. We met

for lunch in one of my favourite Indian restaurants, Malik’s in Cookham Berkshire,

and then spent much of the afternoon sat in my car talking about the City Fox.

On the Unlimited Podcast talking to Stuart Williams about debris.

On the Unlimited Podcast once again – this time the focus is The Brain Always Wins.

Simon Says is a charity for children suffering bereavement.  I had the great privilege of being asked to attend the Simon Says Big Weekend as guest speaker. Not surprisingly, it was a very moving experience.

You can find out more about Simon Says here:

An interview I gave with Crime book Club after the publication of Influence.​ 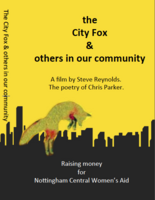 ‘Beautifully put together...extremely gripping...Chris’s vocal and physical expression have a way of reaching the soul   and drawing you in further to the story being told...making one think about the bigger picture of the world.’
Lisa Doherty. Rambling Lisa’s Book reviews.